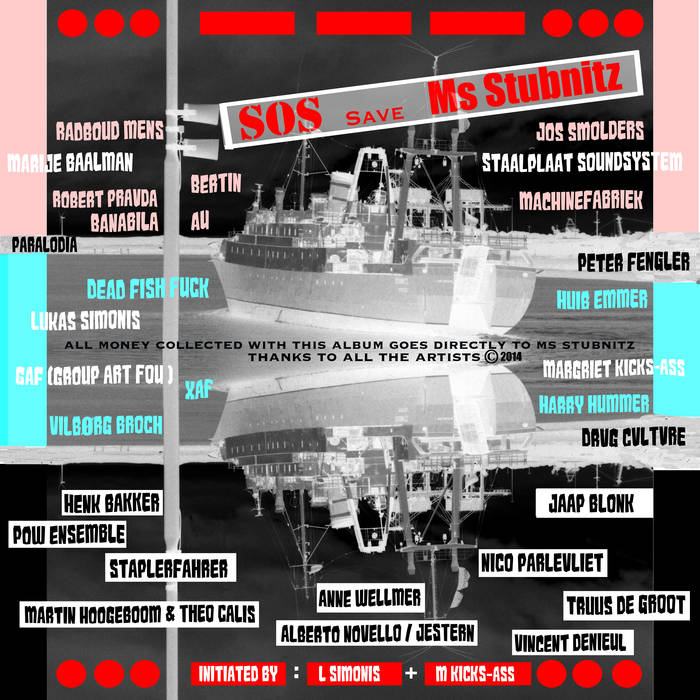 This project is an initiative of dutch artists from the experimental music scene, to support Motorship Stubnitz. Ms Stubnitz is an 80 meters long ex East German fishing vessel transformed in 1992 into a moving platform for cultural research and exchange; in the Netherlands it moored in Rotterdam and Amsterdam on a regular basis, providing space & opportunity for a lot of good things to happen; a diverse range of disciplines including performance, theatre, dance , spoken word, lots of music and parties. This is how an incredible amount of artists performed on the Stubnitz.
On the 1th of September, 2014 the MS STUBNITZ was docked for class renewal in the Norderwerft - a costly affair, which the non-profit association cannot manage alone.

This compilation of dutch experimental artists was invented & produced in less then a week; we hope it will deliver a lot of money to the Stubnitz but it is also meant as a way of giving support to a great ship, it's activities and it's great crew...

Deadline of the crowdfunding project will be 10th of october. SO DON'T WAIT AND BUY THIS UNIQUE RELEASE NOW!

All money collected by this album will go directly to MS Stubnitz.

facebookpage connected to this release:
www.facebook.com/SOSstubnitz

More info about the ship: ms.stubnitz.com
The crowdfunding project: www.nordstarter.org/stubnitz-voll-voraus

Bandcamp Daily  your guide to the world of Bandcamp

Benji B talks about his new compilation ‘Deviation Classics’